A word to the wise. If you find it difficult to deal with obscenity then I suggest you read no further. You'll surely flip out of your ever lovin' gourd should you decide to proceed.

If on the other hand, you're like me and are little bothered by irreverent four letter words and or concepts, then boom. Have I got something for you tonight. As in: a cartoon from Mr. Fish. Ever hear of him??

Turns out he's a political cartoonist. Not one you'll ever see in the New York Times mind you, but a cartoonist nonetheless. And, pretty filthy at times, too. Which frankly is basically easy for me to handle. Gore?? Blood?? Human slaughter?? Dead people in coffins?? Oh man... I'd rather have root a canal before I see anything like that. EVER. But satirical sacrilege?? I'm usually your target audience.

Regardless... in the name of educating, here is a direct quote from Mr. Fish's website whereby either he himself or someone else offered up his bio: "Mr. Fish lives in Philadelphia, PA. He never asked to be born. Occasionally, he laughs his head off. His mother has no idea what he’s up to. She cries very easily. For more information, date him."

LOLOLOL How much do I love that?? Short and sweet and very much to the point. After reading this, I'm SO thinking of updating my Facebook profile, trust me. Of course, I'll have to personally name mySELF as the one who cries easily since that describes me to a T. Anyway...

I came across this cartoon the other day... and only WISHED I could send this message to every Republican on the planet. Talk about "I couldn't have said it better myself!" Besides... after you read this, you'll see why I can simply add nothing more. Other than: given the conduct of how our Republican Congressmen legislate for the common good, they pretty much deserve such a succint conclusion. Oh yeah... I just hope I don't kicked off my blog site. That said, here you go. Uh... be prepared. 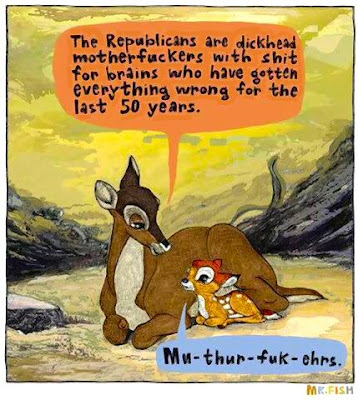 Yeah I know. The last line in the cartoon is totally unnecessary but whatever.