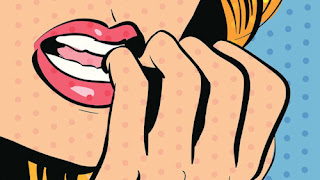 I don’t get it… the rest of the world is walking around as if nothing much is going on, basically whistling, happy as a little lark. ME?? Oh man. I’m like a wreck. And no, it’s not from my quarantining for six months, given I’m pretty happy staying at home and entertaining myself with bullshit. Besides, I’m out enough… a couple of times a week with friends, etc. … but I’ve got jussst enough laziness in me to stick around the house for several days at a time, busying myself with absolutely nothing of importance. Anyway… the reason I’m such a wreck, kinda, is:

Am I the only one in the country freaking out because of this possibility?? Is EVERYone on the planet nuts?? Can’t they see that sheer horror can take place if he, who shall not be named, has another 4 years?? I can’t beLIEVE millions aren’t downing anti anxiety pills by the f’ing boatload. Honestly… you should have SEEN me the day of the first debate. I was nervous all day long and by 45 mins. into watching it and I was ready to explode. I had to turn the whole damn thing OFF. Seriously. It totally screwed with my nerves. My personality is such I’m rarely depressed, but man, can I ever be the poster girl for fear and/or anxiety. And who, more than he, can possibly be a bigger cause for a thumping heartbeat??

I also can not believe all the folks in my beloved democratic country are going to very possibly vote this bastard back into office yet again. WHAT ARE THEY THINKING?? They are in love with autocracy? They love the destruction of our separation of powers? They love immoral, unlawful behavior? They love personality disorders? Or…

Do we just have a country whereby the voters are just plain fucking stupid? Uh… apparently we do. Don’t even get me started on the reality of OTHER dictatorial leaders meddling in our election. Which of course leads me right smack into…

I’m pretty damn happy, God forgive me, that he’s tested positive! Everyone else is bemoaning the fact the leader of our country is sick, in the hospital, and maybe critically ill. Me?? I’m like tap dancing all OVER the place. I kind of consider his having come down with this horrible illness as a major shot in the arm to possibly bringing us all back to a sense of normalcy. And decency. And btw… talk about total pay back! Did you SEE him traipsing out in the car yesterday, waving at all his supporters while most doctors are flipping out at such a stunt?? That was SO not in his medical orders directive. I’m no doctor, but trust me. Even I know that when a COVID patient is hospitalized, they are to STAY in the hospital. Jesus… is there no end to his egotistical choices of behavior?

How can ANYone feel sorry for our President when he felt no empathy whatsoever for the citizens of our country... or in leading us to a healthier, smarter path of recovery... when they were dying by the hundreds of thousands?? What the hell is so HARD about directing everyone to simply WEAR A DAMN MASK?? Sure. No one loves wearing one, but shit, we are in the midst of a major pandemic! Consequently…

Here we are, with many governmental leaders testing positive as well! It’s crazy, I tell you. Crazy. Celebrations. Nominations. Congregations. NO MASKS, NO DISTANCING. Were it me, I’d sue the lot of them for compromising my personal health because they chose not to listen to science, let alone to their own scientific health experts! I’m telling you… this man totally thinks he alone "can fix it" and he alone is a sort of God. Man oh man. What a sick individual. No pun intended.

Okay. So I could go on and on with this ranting and raving. It’s sort of in my DNA. However… in this instance, I have REASON to rant and/or rave. I’m totally AFRAID of this election. It could be the turning point for our whole society and I am tired of Republican voters imagining he is deserving of another term. I’m also on pins and needles, which now could be for weeks and weeks, until I know whether or not Biden has won. Which basically means: uh, yes. I’m kinda a wreck. Shouldn't EVERYone be??

I so wished I could be like all the others I know, who are living with their nerves pretty much intact. They are concerned indeed, but they are also pretty grounded during these next several weeks until November. I am so jealous of their ability to be calm and just wait it all out. NOT ME. I like to worry and freak out until I know all will be well once again. Kind of like when your child or loved is sick and you are fraught with distress, but instead, need to be emotionally strong and just get through it. Bottom line:

Yes. I am calm and deliberate and controlled during a crisis. BUT WHEN ALL HELL IS BREAKING LOOSE?? HOLY BA HOLY BATMAN. I can totally border on anxiety, fear and apprehension.

I know. I’m special that way.