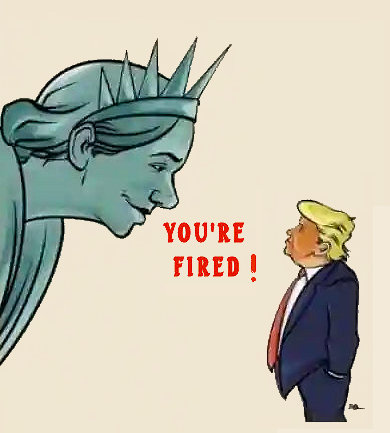 OMG. What can one even say other than thank God the poisoning of our nation is over. It’s been the most horrible four years for democracy I’ve seen in my lifetime and I pray it never ever occurs again. What Trump has done to this nation is unfathomable given he was on the verge of bringing it to it’s knees, thereby almost ensuring we could never recover. While many, many Americans still have no intelligence nor decency, as proven by their voting for Trump yet again, at least NOW we have a chance for reclaiming our country. Already you can hear the relief in my voice.

I cannot TELL you what the past five days have been like for me. I was scared shitless, I don’t mind saying. Which reminds me: GET RID OF THE POLLSTERS ALTOGETHER. They have no damn clue of what they speak. First I could breathe. Then I needed an Ativan. Then I had a glimmer of hope. Then I needed an Ativan all over again. It was up, down, up, down and that is SO not good for my 72 year old nerves. YOU’RE TRYING TO DRIVE ME CRAZY? WELL… GUESS WHAT. MISSION ACCOMPLISHED! I can’t even believe I weathered this storm. My emotional tossing and turning was way worse than I imagine any tornado could have caused. Well, almost worse, anyway. Just suffice it to say I was a wreck. Now however, I am pretty much grounded once again. Talk about thank God for small favors.

The last happy evening I had was on election night, when I had my quadrennial dinner party. It was absolutely DELICIOUS (my favorite was the garlic bread and Oreo Chocolate Pie) and the leftovers totally fed me for the next three days. I was in pretty high spirits… figuratively and literally. We all had a rollicking good time, practically sure the asshole was going to be booted out. Of course, as I mentioned, the next four days were about to send me to the funny farm, but all’s well that ends well. 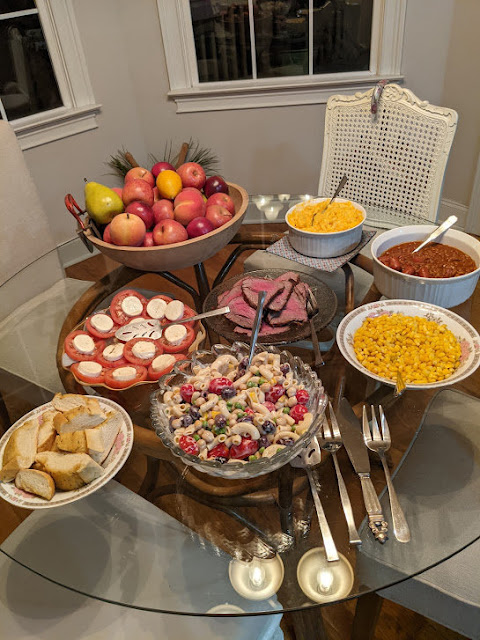 The other happy thing, btw, is that during the very first debate, I began knitting. I decided it was a great way to not only begin using up some of  my 362 skeins of yarn, but it also served to keep me somewhat sane. I began with a pink color and here we are… the night the election was called for Biden… and boom. Want to guess how many cowl neck scarves I’m made so far? Think: EIGHT! That’s right. 8 scarves, several of which I’ve already worn. Here… take a look. I even began a brand new one just this evening given busy hands are happy hands. 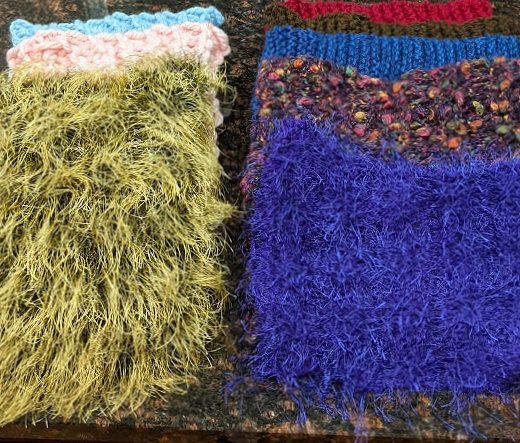 In the meantime… I am just so grateful for all the ballot counters who worked tirelessly to bring home the win for the Democrats. I don’t even know if they got paid, but regardless… they deserve $100,000 a year, for the rest of their life, just for putting in so many hours for such a good cause. And you know what? If by chance they had to cheat on the vote count to be sure Biden came out on top, then kudos to them. I could care less how we won. Am just glad we DID win. Actually… glad is not even the right word. Exhilarated would be better. THRILLED BEYOND FUCKING BELIEF would be best.

Which of course brings me to Trump, may he rest in hell. How does he get covid btw, and three days later is out running to rally after rally all OVER the damn place, anyway?? I’m pretty damn healthy and can’t even run three errands a day without collapsing. What sort of amphetamine is HE on? Now THAT is something I could use! I think my greatest excitement will come when I finally hear that Melania is kicking him out on his ass, much like the country has done. She’s a fool if she doesn’t. I’m also hoping that somewhere in her prenup, it says if she sticks by him while President, then she gets an extra $10,000,000 in the settlement. Unfortunately for her, he doesn't HAVE it, but it matters not at the moment.

Of course an even greater excitement for me… will be when the courts for the Southern District of New York begin hauling Trump in so he can hopefully spend the rest of his life in jail. Yeah… where’s Roy Cohn when Donald REALLY needs a lawyer? Okay. Granted. He’s dead, thus I pray Giuliani is the attorney of choice. Then for SURE Trump will be headed to the slammer. Wait. Maybe Rudy himself will be headed there as well. Talk about wishful thinking! In any case…

WELCOME BACK TO THE UNITED STATES OF AMERICA! LAND OF THE FREE AND HOME OF THE BRAVE.

The world leaders have been calling Biden all day long congratulating him and THANKING HIM FOR RESCUING PEOPLE ALL OVER THE GLOBE ONCE AGAIN.  Oh, indeed. It’s a glorious thing to know that Trump, his idiot sidekick Pence, Barr, Javanka, Mark Meadows, the dumb blonde Kayleigh, the other dumb blonde Kellyanne… the other other dumb blonde DeVos… ALL OF THEM… are out of our government for GOOD. Where btw, has Ben Carson been the past four years?? Has he done ANYthing?? Jesus. He looks dead, even while living. Good riddance to them ALL.

In fact, I’d rehire Colonel Vindman at double his salary, including back pay, in a heartbeat. Lastly... get a load of this! 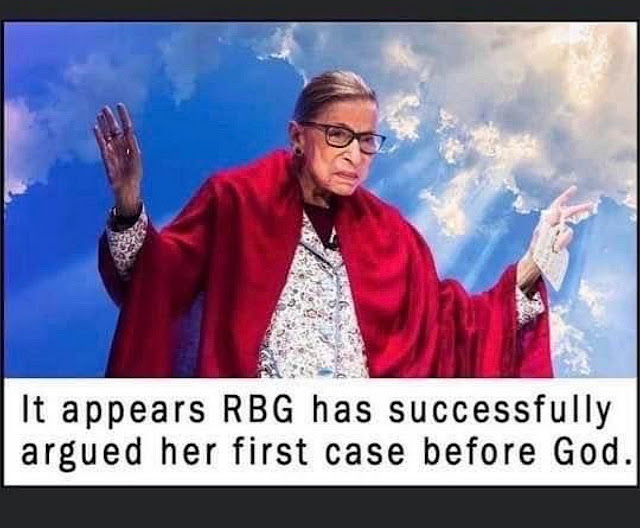 AIN'T THAT THE TRUTH! THANK YOU RUTH! IN GOD WE TRUST. 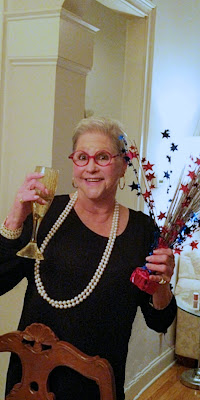