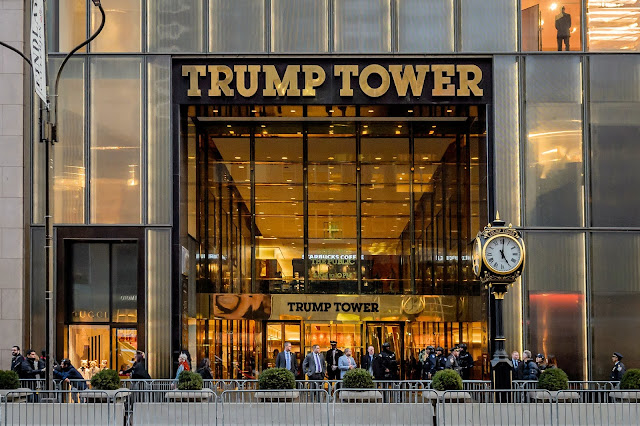 I just don’t get it. But the Trump family gets it in spades.

Uh… exactly what is it they get? Oh man. They test positive and sure enough, at one time or another, they're allll contracting covid 19! And tons of their co-workers, too.

WHY AREN’T AT LEAST ONE THEM DEAD ALREADY??

Or in a hospital. Or on a ventilator. Or having SOMETHING seriously and/or dangerously horrible affecting their health? Honestly. I don't get it. Man. Are THEY ever beating the odds!

Granted… Trump was in Walter Reed… but bingo. 3 days later he’s out, feeling spiffy as hell. Everyone else is basically quarantining and just sitting at home, waiting a week and then boom. They too, are out of the house as if nothing on the entire planet is killing people like flies. WHY ARE ALL THE TRUMPS ABLE TO FEND OFF THIS VIRUS, ANYWAY?? Are they supernatural or something? How the fuck are they still functioning? ALL of them.

Seriously. Not even one out ten people in the White House, where the virus is kind of bringing down all the staff day in and day out, is in the hospital. Okay. Chris Christie was, but still. This deadly disease is like a mere common cold to all the rest of them. It’s just such a major mystery to me and a mystery I don’t think anyone will ever be able to solve to my satisfaction.

Believe me… I am SCARED AS HELL I might contract this deal. I’d be dead in a week. Trump and his cronies however? A little headache and next thing you know they are back at the office spreading it to everyone around the White House, yet never is even one of them really, REALLY sick. It simply defies my imagination.

They wear no masks. The hang out in groups of hundreds and even when the Trumps spread the disease to everyone they know… even THOSE PEOPLE don’t wind up in intensive care. Are they all taking hydroxychloroquine and it’s working??? They are dinking Clorox?  Man. Have I ever got to get an appointment with their doctors. SOMETHING’S working for the hordes of people around Trump, keeping them all alive.

I, of course would never make it. I contract covid? Boom. I’m not breathing and the next thing you know, I’m reminding my kid in which drawer my Will and Trust can be found. Because believe you me, there is no way I’m coming out of it. My anxiety about even having covid in the FIRST place, would do me in. Besides… it’s practically winter and each year between now and spring, I always have some sort of respiratory situation pop up. Normally an inhaler takes care of it licktety split but during this pandemic? Oh man. Get me into the ICU immediately.

Oh yeah… even Andrew, Giuliani's son, tested positive!! How much you want to bet he’ll be in the house in a couple of days and then bingo. He too, is back out on the streets. Whatever magical water the Trumps are drinking to snap them right back to perfect health is the water I want! I’m sure it will be shared with Andrew, too, btw. Talk about the benefits of knowing people in high places. Oh yeah… speaking of Giuliani…

How much do I love that Rudy was oozing hair dye all down his face during his news conference?? Whoa. Was THAT ever hilarious. I can’t even imagine who his hairdresser must be. Some sources claim it wasn’t from his hair but instead, from his sideburns which were dyed to match his hair color but it doesn’t make any difference to me. WhomEVER it was should be fired immediately. Boy did he ever look like a friggin fool. Right smack in front of the entire world, no less. THANK YOU RUDY FOR ONE THE ALL TIME FUNNIEST PHOTOS EVER. Does NO one on his team pull him aside and say UH… SIR. YOU LOOK LIKE A COMPLETE ASSHOLE RIGHT NOW, SO COULD YOU STEP OVER TO THE SIDELINE FOR A SECOND? WE TOTALLY NEED TO WIPE YOU DOWN. Happily enough, everyone just let him keep going as all of us watched him begin to almost turn into a vampire of sorts. THANK YOU TEAM RUDY. 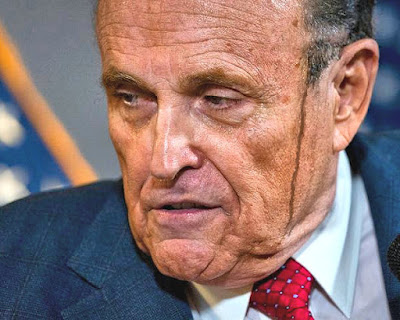 And btw… how is it HE hasn’t contracted covid?? Rudy is all OVER the place inside the White House. I just can’t get over it. In the meantime, had Ivanka tested positive, Trump would be apoplectic. But Don Jr.? Hey… no big deal. In fact, just last night a friend and I were mocking the disgusting way Trump practically drools over his daughter with sheer lust in his eyes. Both Ivana and Melania totally have major competition going on there.

I can only hope the lot of them are carted off to jail or forced to pay zillions in fines for all their criminal financial activities. Actually that family had better NOT quarantine for Thanksgiving this year. Because NEXT year they could so be in the big house. If only. Besides… why miss out on another opportunity for community spread throughout the entire family all at one meal? That sort of practice is way up their alley.

And speaking of  Thanksgiving…  what am I most thankful for this year?? TAKE ONE GUESS. For indeed, there is just one and only one answer: 'F’ING TRUMP IS OUT ON HIS ASS. And yes… I am forever grateful for my kid, my loved ones, my health, yada yada yada. But even that can’t override my glee at seeing Donald FIRED. You can be sure January 20th can't come fast enough for me.

And with that... Happy Thanksgiving to everyone. May you enjoy the holiday with loved ones, whether via phone, zoom or gulp… in person. Most importantly... I hope none of you or your loved ones test positive. Ever. Even if you DO figure out how the Trumps just breeze through this disease. For trust me... I bet YOU won't. And... as long as we're betting here... who out there thinks Trump was just faking his sickness after all? Never say never.

Oh wait... one last thing. WHAT EVER HAPPENED TO GIVING THANKSGIVING IT'S PROPER DUE, ANYWAY??? The holiday hasn't even yet ARRIVED but all over the city, Xmas lights are all lit up like there's no tomorrow! Seriously... people are just jumping right smack over Thursday's celebration and moving right into Santa Claus and all his reindeer? Man. Talk about a major scam for Tom Turkey. Want proof?

Here... take a look below for a shot of my neighbor's house across the street. It's nuts. They're already all decked out! Plus... every year they are this close to becoming another Disney World with all their lights and decorations. Believe me, this is just day one of what they'll put up later in the week. See the window just above the front door? That's where their sparkly, all lit up snowman goes each year. And basically it stays there until Valentine's day. Just wait until the blow up reindeer, sleigh, etc. come out. Boy. Talk about not being able to wait until 2020 is over.

On the other hand... who can even blame them? 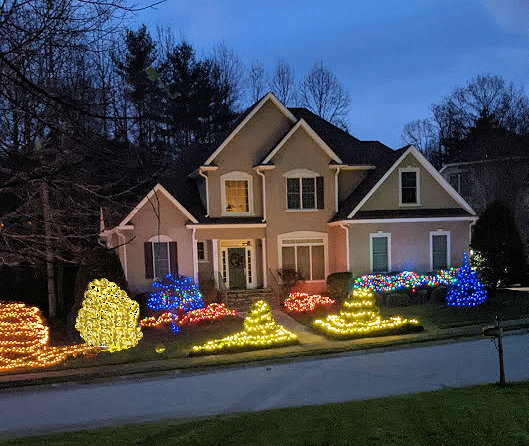