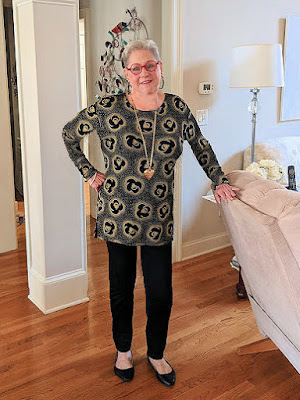 This is me. This is me during the pandemic. This is me withering away. This is me freaking out about it, too. Well... wait a minute. Let's not get carried away. Only KIND of withering. In any case...

It’s VERY rare that pictures are taken of me whereby you see my entire body. Trust me… I normally run like a bat out of hell to be sure my entire body is NOT captured.

However… the other day my sister, Claudia, was here and she did take such a picture! EEKS. Why?? Because basically she, like me, has been somewhat mystified at what appears to be my body withering away. Remember: only kind of. Through no help of my own, I might add.  And… she tells me all about it almost every damn day. So much so that I need to tell her over and over again… ENOUGH ALREADY. Seriously… until she kept commenting to me about it, I didn’t even think about it all that much. Granted, in her eyes there isn’t all that much about me of which she doesn’t rave, but still. This is like nuts. I merely thought maybe it was my imagination, to tell you the truth. But whoa. Claudia is like obsessed about it. I think she may be jealous, which actually, she ALso tells me everyday.

OH YEAH… TIME OUT. This is an interesting  side note:

So when Claudia came to my door… I opened it after I heard the door bell and boom. She thrusts this large candy cane shaped deal filled with mini Reese’s Peanut Butter Cups … which is a total favorite of mine… in front of me and says: THIS IS FROM YOUR BOYFRIEND! REALLY. HE SAID “BOYFRIEND" THREE TIMES! I looked at her kind of pretty damn astonished because 1.) This could naturally, have come from any number of men crazy about me and 2.) I had no clue whatsoever who the heck would be labeling himself as my boyfriend! All I could say to her was: What the hell are you TALKING about?? Turns out however… my “boyfriend” is the wonderful retired guy next door, who btw, just happened to have ALSO brought me flowers on Thanksgiving! Man… I can’t WAIT for Christmas for God only knows what I might possibly get then, but you can be sure I totally hope it’s pricey and bling-y. Then Valentine’s Day?? Geez. Maybe I should alert him now that I don’t normally do milk chocolate… dark only. On the other hand, he should know already, I'd NEVER have a boyfriend who voted for Trump but whatever. Regardless… I digress. Back to Claudia and my full body shot.

I do have to admit it IS kind of bizarre. I don’t even know what’s happening but for some reason, I am losing weight. In fact, I'd have to say that since a year ago, I bet I've lost close to 10 lbs. Which COULD mean I am pretty sick with some horrible disease that just hasn’t been diagnosed yet. Although according to all my doctors, I’m in excellent health, so go figure. No pun intended. And actually, I haven’t felt much like eating this past week, but I suspect that is just temporary given I’ve been feeling a tad unlike my normal chipper self. Which is also weird. Normally, I’d be downing all kinds of food if I’m feeling out of sorts, but okay. I guess this is the way God wants it.

On the other hand… I am guessing that maybe the real reason for my weight loss the past 9 months is perhaps because I’m not able to dine out like I loved to do before this pandemic. Who knew there would be a GOOD reason this virus came about? Lunch time would probably be my meal of choice to indulge in high calorie foods, but sadly… I’ve had to forgo dining out for lunch AND for dinner. Damnit.

However… regardless of the reason… “there’s something strange in the neighborhood” and I totally can’t call Ghostbusters. Yet still… “there’s something weird and it don’t look good” and again… I can’t call Ghostbusters. WTF is going on with me, anyway?? You should see how much of my wardrobe needs altering for it to fit correctly! In fact... given I'm pretty lazy... I may just have to ditch it all and donate it to a women’s shelter. YAY. MY MAIN CLOSET WILL SUDDENLY BECOME EVEN MORE ROOMY AND EVEN MORE EASILY ACCESSIBLE. Now THERE'S a bonus if ever there was. Besides… even with the donation, I’ll still have a wardrobe enough to clothe 4 women in all kinds of get ups.

Granted, most people would love to be in my position. In fact I know people who have GAINED weight, being inside for all these months. But apparently, not me. Now look… I’m not complaining, but I AM a little perplexed about it all. You should have seen me during Thanksgiving, for instance. While I ate no turkey, I totally downed all the other dishes, including a serving of pecan AND pumpkin pie. No… I didn’t finish either slice which btw is also a crazy thing. I’d normally finish off both desserts with sheer delight. Uh… not any more. Which I’m beginning to think is yet another sign pointing to my getting older or being horribly sick.

For my entire life, I have had the appetite of 3 people put together. Uh… and usually, my figure showed it. Oops… I mean my physique. But now?? At this age? OMG. You should see my sagging body. Uh… God forbid. Which is why I say withering not wilting. Big difference. Anyway…

I’ve always said: I am THE target audience for clothing manufacturers. Case in point: let’s say you invited me to your house for dinner. I’ll totally be dressed spiffy enough. But then…  let’s say you served pigs in a blanket for appetizers. Now most people will take maybe two and call it a day. ME? Geez… I’LL TAKE FIVE OF THOSE, PLEASE. THEY’RE MY ALL TIME FAVORITE! THANKS. And bingo. Down the hatch they’d go with a smile on my face.

I just wished I knew what the hell was going on inside. Have you any idea how hard it is to take in every piece of clothing you own?? And the funny thing is… I would never want a love interest to be withering away like this and become all skin and bones. (not that that’s ever going to happen to ME) I’m into husky and burly. In fact, I have a friend who says he weighed 115 pounds when he married. WHAT?? ISN’T THAT WHAT A 13 YEAR OLD WEIGHS? Like at his Bar Mitzvah, maybe? Talk about where’s the beef! Luckily however, I’ll never have to worry about that given I’M never going to see 115 pounds ever again. Uh… I hope. For if so, call the funeral home immediately. That would be the ONLY reason for me to ever weigh that crazy amount.

Now, I will say that for over a year, I have decided to be very careful about my carb intake. But that doesn’t mean I don’t do ANY carbs, heaven forbid. For instance, I could never live without my daily bite of Hershey’s Dark Chocolate XL candy bar. Granted, I literally only take one bite per day but still. It’s enough to kill the craving. Regardless…

Feast your eyeballs on the one and probably only time you’ll ever see a full length photo of me. I don’t flaunt my body EVER. My clothing, okay. But never my body. When the day comes that I look like Nicole Kidman however… who probably DOES weigh less than 115 lbs… well, that’s another story altogether. THEN?? Why then… I’ll not only flaunt my body, but I’ll happily even do it nude! Man, she’s gorgeous. The damn bitch.