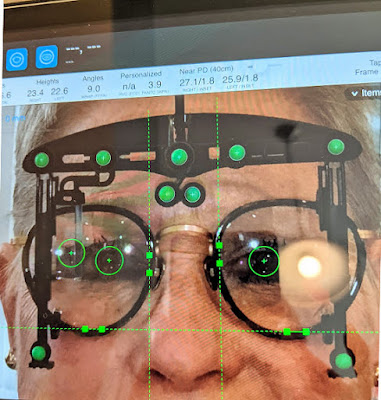 ♪ I can see all obstacles in my way ♪… literally! Man. I can’t TELL you what high hopes I have for my possible new eyesight. THANK GOD FOR SMALL FAVORS is all I can say.

Granted… it hasn’t occurred yet, but believe you me, I’m so looking forward to this! Talk about a crazy ass story. To begin with… I have been going to the same optometrist for almost 20 years. And I loved him. Plus… he loved having me as a patient for trust me… I was like none other he ever had.

For example, how many other refined women get into his examining chair and as soon as he turns off the lights to read the eye chart across the room, has to say:

WELL… I LOVE THE TOP LINE BEST BUT, SHIT. I HAVE NO CLUE WHAT THE FUCK ANY OF THOSE OTHER LETTERS SAY! THIS IS A JOKE, RIGHT?

Immediately the doctor would burst out laughing which was crazy, for I on the other hand, would sometimes totally be teary eyed. No wonder. Everyone ELSE can read the letters lickety split but because of some bizarre eye disease I have, I CAN’T.

And yes… I know. It may SOUND like I am not refined, but believe me, I am. Well, when I need to be, anyway. But when I can’t see what the rest of the world can, well then, my inner instincts come out in no time at all. Like when I have to say:

WHAT THE FUCK DO YOU MEAN THE WORST THAT COULD HAPPEN IS I CAN’T DRIVE AT NIGHT! OF COURSE I HAVE TO! WHAT IF I NEED TO MAKE AN EMERGENCY ICE CREAM RUN TO THE GROCERY STORE AT 9:00 AT NIGHT? EEKS.

At which point, yet again, this sweet innocent southern gentleman bursts out laughing. Oh yeah… he also liked to see me in the hallway and and say: UH OH. HERE COMES TROUBLE. But he always said it with love and a smile on his face. Seriously. I loved this doctor. In the meantime…

His partner bought him out and then boom. The partner turned around and sold his soul to a big corporation to now run the office under the umbrella of a horrible company, making the optometry practice blow up in the face of all the patients. It was awful and eventually my beloved doctor eased his way out altogether by simply retiring. Basically not only did my doctor leave, but so too, did half his patients. Talk about easy come, easy go.

Every six months I also see a retinal specialist, and if HE ever retires, I’ll shoot myself altogether for I love this doctor as much as I loved my optometrist. I even asked him on my last visit… NOW who do I see for my eyeglass prescriptions? Answer: anyone in town will do a great job. Which basically meant I had to sort of spin the globe and point my finger anywhere on it for it to stop and bingo. That would be my new optometrist. Anyway…

I didn’t wind up spinning a globe. Instead, I asked friends, I asked opticians, I even Googled doctors near me to suggest a new doctor and lo and behold… I found one whom no one seemed to have ever mentioned. But… I totally think I've struck gold! YAY EYEBALLS.

Thank God, given I forgot to mention… I’ve been on an ocular mission for months. A mission that has had my stomach in KNOTS for the last year, no less. The mission, you ask??

TO PASS MY NEXT EYE TEST IN MAY AT THE DEPT. OF MOTOR VEHICLES!

I mean it. The last time I renewed my driver’s license, I had to take an eye test. You look through this gizmo of sorts and then you’re supposed to read what I guess are road signs. Small glitch, however. The signs are about as big as half an ant. WHO THE HELL CAN SEE THESE SIGNS, ANYWAY?? Well… apparently all of YOU can, but not me. It’s nuts. I struggle, I guess, and then… I just wind up praying I pass. Which actually I did 8 years ago. NOW however?? Oh man. It’s going to be a MAJOR challenge come May. ENTER: NEW OPTOMETRIST.

I found a doctor I thought I would try and made an appointment. I knew nothing about her nor about her office. First person I see when I walk in however, is Deena… who used to work at my OLD optometrist’s office. Yippee. It was like a home coming! As I said before… both patients AND staff apparently left in droves. Anyway, I laid it right smack on the line for this new doctor immediately.

She walked into the examining room and I told her my story: the old doctor and his office became an organizational nightmare… had to leave… have an eye disease the name of which I can’t even pronounce… feels like sight is declining in distance… can’t even read the small print on my big TV screen… suspect a new prescription is needed for both regular AND computer glasses… can’t see the baby little signs at DMV eye test… and most importantly, totally have to see by May when renewal comes up for driver’s license! I also threw in our possible need to bribe the tester should things become iffy with him or her. They are my obvious life line to driving my car, thus life as I know it, could totally wind up resting solely on this one doofhead. DEAR GOD. PLEASE LET THESE TESTERS EITHER PASS ME OR AT THE VERY LEAST, ACCEPT MY BRIBE. AMEN.

Turns out however… drum roll… this new doctor is my new gem! Well… so far, anyway. She was so patient with me. She had all kinds of diagnostic machines I had never ever seen before. Like what you see in that pretty disgusting picture of me up above. I was so stunned at this machine that I just HAD to take a shot of it! I had NEVER had this sort of machine figure out exactly how to precisely measure a lens for me. I was totally impressed! I know. I must have been living in a cave all these years. And man, was she thorough! I felt like I was in eyeball doctor heaven! HALLEF’INGLUJAH!

The BEST news however is… the doctor told me that according to my eye chart test results... I was totally going to pass my driver’s test!! YIPPEE. I CAN ACTUALLY KEEP ON DRIVING!! Famous last words of course, but regardless…  this means: THANK THE LORD! I can still run out for Diet Coke, Fritos or ice cream any time, day or night!! Whew. What music THAT was to my ears!

Of course that also means I have to probably read the pamphlet and actually KNOW the answers to questions on a written test, should I need to take it. Which is crazy altogether. How do I know what I’m supposed to do if my car begins to skid to the right because of ice on the road? Or what to do if an airplane lands right smack next to me while on a highway? Basically… in either case it won’t matter because I’ll be horrified, frantic and basically screaming my ass off, anyway. And I could almost bet THAT won’t be a multiple choice answer in the driving manual. In any case…

Yay. I have my new prescription, but I haven’t yet decided where to go for getting the new lenses made. I could have the optometrist’s office do the three pairs for me, but even with my own frames, I’m still looking at a MIGHTY hefty investment. Or… I could go to an optician and have them do my lenses but again… a pretty penny. OR… I could go to one of these big box stores my friends rave about and have THEM fill my prescription for a much much lower cost. Man. Talk about a dilemma given just last April I had all three glasses made with lenses that already cost an arm and a leg.

If all else fails however, my dream fantasy could possibly come back into play. Yes, an evening cook is my first fantasy but my second is totally hiring a chauffeur! Kind of like an Uber driver, but way more professional. It kind of gives me the creeps hopping into an Uber car with a total stranger that possibly shoots up each night or is still drunk from the night before. ENTER: HOKE.

The guy who drove Miss Daisy all around town. Now THAT is a guy I’d trust in a heartbeat! With HIM... I wouldn't even need to run a background check. And yes, unlike Daisy... I would CERtainly let him stop for a bathroom break! Besides, I'd probably have to join him.