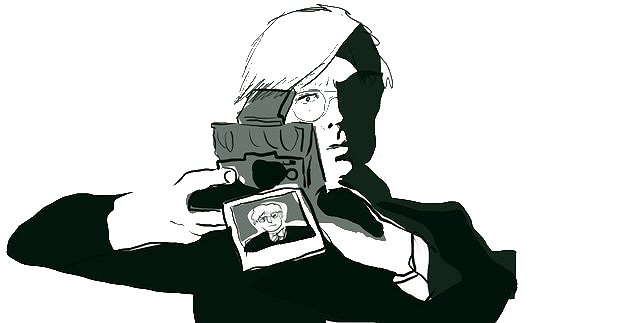 See that pict up above? I'm hoping I don't have to tell you who it is. I'm also hoping the white hair and the Polaroid camera is a dead giveaway.

In that vein, let me just tell you I have two favorite artists: Andy Warhol and Fernando Botero. Warhol was my first love... I was in my late 20s. Botero was my second... I was in my mid 40s. Which means that when Bob Colacello's biography of Andy Warhol, HOLY TERROR came out in 1990, I was practically first in line to buy his book. And I read it feverishly, with sheer delight. Mainly because Bob was like THE last word on Warhol.

No wonder. Bob was Andy's right hand man in running his INTERVIEW magazine as well as being Andy's confident, collaborator and employee. And... all this was going down at the height of Studio 54, AIDS, recreational drugs, etc. All of which drew Warhol into that crazy ass loop with wild abandon in spite of the fact he was not a big lover of drugs. Andy loved celebrities... as you must know from his huge silk screens. His Campbell Soup silk screens were totally the last word on iconic Pop Culture. Talk about a man of his times, especially in light of his infamous line alluding to everyone's 15 minutes of fame. Of course I myself am so awaiting my own 15 minutes, but who's counting.

In the meantime, Colacello knew everything Warhol. I even went to a fantastic MEET THE AUTHOR once, on Lincoln Road in Miami Beach and naturally had my copy of his book signed. And this was way before Lincoln Road became the pedestrian mall it is today. I think, anyway. I also think the event was held in the Colony Theater but frankly... I'm way too old now to remember all the particulars. Actually, I just now went to check to be sure I still have the book, since I'm totally hoping a signed copy be worth zillions by now. I was once on a roll way back then, whereby I loved having signed first editions, so yippee. Next I have to go check out it's worth. Regardless...

There is no question that Warhol was gay but it's so damn interesting to me that he also claimed in 1980 he was still a virgin. Colacello actually seems to believe this may very well have been true. He lived pretty much a celibate lifestyle. And while Andy was horribly afraid of AIDS it was, in fact, a complication from gallbladder surgery that caused his death. Which not only shocked the ever lovin' shit out me on the morning it occurred but is way too bad given he had a really horrible fear of doctors and hospitals.

Anyway... when I came across this photo you see of Andy up above, for some reason all kinds of thoughts about him came rushing back to me. I so have to go re-read his biography. This guy has one hell of a life story is all I can say. His early life is so damn interesting to me, however nothing could be more interesting than his adult life.

That Warhol only lived to be 58 is such a shame on so many levels, not the least of which is, I'd love to know how the heck he'd react to the fact gay marriage is now legal. If he only knew how far the gay community has come since his death, I am sure he'd sidle right on up to gay pride in a heartbeat, with total pleasure. Lest you think Andy Warhol was a mere artist btw, think again my friend. He was also involved in film, theater, magazines, music, photography, etc. etc. And oh yeah... check this out... a piece depicting what Andy may even look like today, were he still alive. It's totally cool: 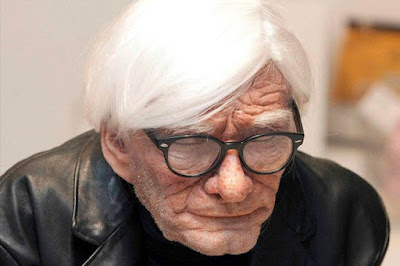 It goes without saying... one of the more interesting facts about Andy was his total white hair. Uh... when only like in his 30s let's say. Outrageous, right?? Couple that with his thin body build and his love of basically jeans only, his big glasses and man, have you ever got a look. Some people say he was pretty bald at a very young age, some say he merely died his hair silver just to be noticed. On the other hand, there is no doubt he had many white wigs and wore them religiously with utter devotion. The best thing about reading a Warhol biography btw is that you learn all about his thousands of idiosyncrasies. Which of course to me, makes him one of the alltime best personalities known to man. I so love those with flamboyance, flair and creativity.

Besides, if you ask me, Warhol had maybe the best business model ever. In fact, in any fantasy I've ever had about starting a business selling something I've created, I've always said time and again: I'M GOING TO DO THIS JUST LIKE ANDY WARHOL. I WANT MAKE IT FAST, EASY, BIG AND THEN... CHARGE ZILLIONS OF DOLLARS PER ITEM. Boom. I always figured I'd then become a happy little millionaire lickety split. Yeah. Yeah. Yeah. Well so much for my own pipe dreams but for Andy... man did it ever work like magic given his silkscreens have totally gone for as much as $100 million. I'm way jealous. Besides he had plenty of people replicating his works for him. Now THERE'S an artist with a great idea. In the meantime...

I'm pretty sad that Warhol died so young. He was a major genius. He was also pretty nuts, but who's counting. By the way, hook up my favorite artist with my personal favorite icon... not counting Queen Victoria... and boom. Look what you get. Which I just happen to have on a 16x12 glossy paper bag right smack on my fancy display shelves in my home. I totally love it. 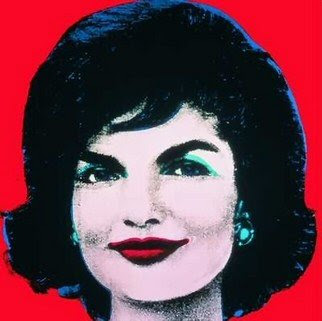 And in closing... remember the shot up there in my title?? This pict is the original. For those who care. 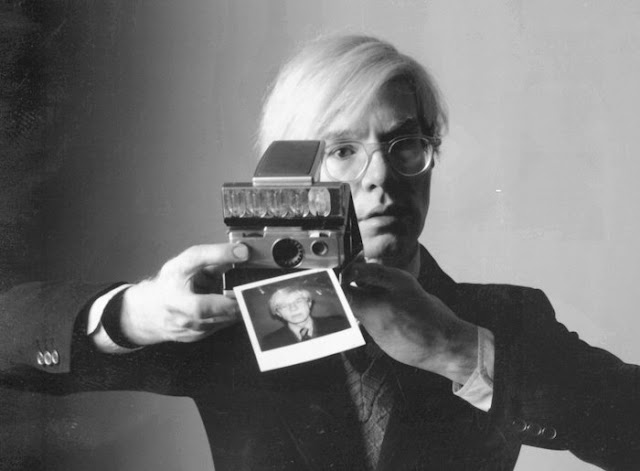