Tonight I'm giving you all a test. And btw... for those of you still in South Florida... and you DON'T pass it... then you've apparently been living inside a freakin' cave all these years. The test??? Easy. YOU'VE LIVED IN MIAMI?? OKAY THEN. PROVE IT. 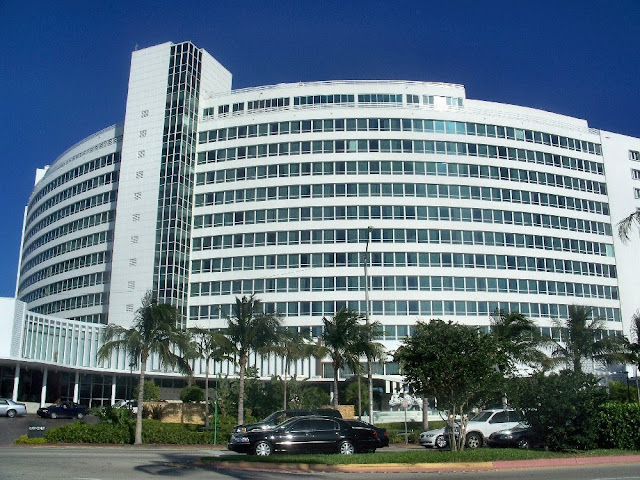 I'll make it even easier for you: 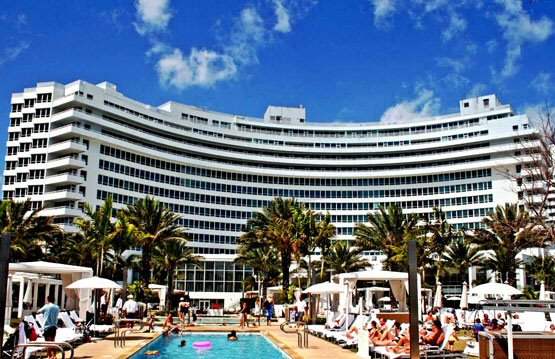 Buzz. Time's up. Oh man... anyone who can't tell me what this building is or where it is located, gets major demerits. Living in Miami or not. Besides, this building is so famous that up until recently it never even had its name on the front. Demerits can be given regardless since basically... there are HORDES of movies where this building has either been featured or actually even been used as the film's prime location. So bingo. I'm hoping everyone came up with the same answer. As in - the name of this building is:

I can't even tell you how many times, while growing up, I've been there. In fact... I'm almost thinking that my Grandfather actually had a cabana there, but I'll have to ask my sister for verification of said memory. I've been there as a hotel guest as well as a mere visitor to the restaurants, entertainment, pool, conventions, etc. It was and still is a glorious building and a MAJOR landmark. And... it was designed by Morris Lapidus, who it turns out, became a hotshot, noted architect. Morris also designed the Eden Roc Hotel, which is right next door to the Fountainebleau. Which by the way, royally pissed Ben Novak off but PLENTY. Why so pissed??

Because Ben Novak owned the Fountainbleau and it was literally his pride and joy. More so in fact than even his son... Ben Novak Jr. Ben lived and breathed for the hotel, much to the chagrin of Benjy Jr. Thus, building the Eden Roc right smack next door was more than Novak could stand. In fact, he was SO pissed that Ben then built a huge addition to the Fountainebleau that would totally cover the sunlight from the Eden Roc's pool.

Wondering how I know all this??

Easy. I'm reading Novak's biography and I'm telling you... it's mighty spicy to say the least. The book includes stories of huge Hollywood celebrities, the Mob, hordes of monies passing hands, lavish celebrations, zillions of women, and even murder. The book spends half the time talking of Ben Sr. but soon spends the other half of the story talking of Ben Jr. Oh man... now THERE was one f'ed up kid if ever there was.

On the other hand, who can blame him. His father basically ignored all parenting responsibilities other than keeping Benjy's wallet pretty well padded. Benjy grew up living in the family's 17th story Penthouse and had access to any part of the hotel he fancied. He also had a HORRIBLE stuttering problem which totally embarrassed his father. Plus... Ben Jr. had a total addiction to law enforcement and later even became a part of the Miami Beach police reserve force. Lastly... what a surprise... Benjy also had a penchant for strippers and overall poor skills in choosing dignified women with whom to surround himself. All in all, this biography not only intrigues me but also brings back memories of days gone by.

The hotel is impressive to say the least and my memories themselves pretty much take note of such impression. You walked into the lobby? Boom. You just knew you weren't in Kansas anymore. It was elegant. It was filled with people hustling and bustling. It was a happy place to be. The pool was amazing. The restaurants had perfectly fine food. And oh yeah... the entertainment was top notch.

In the meantime, I'm not yet finished with the biography but just let me tell you: things don't work out so hotsi totsi for Benjy. Nor did they work out so well for his father, either. As in: he went bankrupt and lost the Fountainebleau altogether. Which trust me was a hole in his heart from which I don't think he ever recovered.

Bottom line here? What a great place this hotel and Coral Gables and Miami Beach was back in the 50s and 60s... a totally fabulous place to have grown up. And oh yeah... for those who have a penchant for history HERE is a link that will teach you all you have to know about the Fountainebleau. It's pretty interesting if you ask me.

One last thing. How many of YOU were in fact able to have a piece of all this history? If, like me, you were... then maybe this will look mighty familiar. I totally love it. 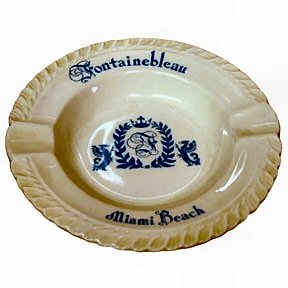