Oh yeah?? Friends?? Oh man.... some way to stay friends, alright. First of all... I have one friend with whom I play this game that ALWAYS beats me by at least 100 points. One of my BEST friends, too. On the other hand, I myself have beaten many a friend by my own 100 points, so hmmm... I guess it all evens out in the end.

In the meantime, I totally love this game: WORDS WITH FRIENDS. It's a Scrabble like game and I only decided what? A mere 4 months ago maybe, to join in with the other billions of people on the planet to become a part of this word friendly crowd. Yes, I will admit... I play Scrabble on my computer at least twice a day and have done so, for YEARS. And I have a Crossword book along with other magazines in my bathroom. Only recently however have I decided to play against others in the vast universe. And believe you me, am I ever glad I did!

Other than the fact... oops. IT'S TOTALLY ADDICTING. Seriously. I am now even keeping my iPad on the table next to my recliner so that when I sit down to watch TV at night, I can ALSO be multitasking by playing this game with something like 10 other individual players. And while I adore playing with my actual friends, I ESPECIALLY love the games I am playing with hardcore strangers. I have no clue who they are, where they live, or what the fuck they do. But man... some players are GREAT. I of course have beaten them every single time so far, but that's only because I had fantastic letters with which to make even more fantastic words.

These usually strangers have a mere number as their screen name so I have no clue whether or not they are males or females. I play this one game actually, with whom I am assuming, is a guy. Not just any guy either, because I swear to God... the words he comes up with are so damn challenging and so damn smart that I've concluded I'm playing with: Bill Clinton, himself. AND... if it's NOT him, then I decided it must be Madeleine Albright. He and/or she is a brilliant player and it simply knocks my socks off. Matters not that I beat Bill and/or Madeleine every damn time but trust me... they give me a damn good run for my money, nonetheless. In the meantime...

I have to totally do something about this addiction bit, however. I can sit watching stupid ass TV and playing this game for HOURS at night. Hours during which I should be actually ACCOMPLISHING something! Like doing laundry, straightening the kitchen, SHOWERING, even. But the time just ZOOMS by and the next thing I know... it's hours later and I'm dead tired and have completed no task whatsoever. This is a way to treat your friends?? I totally think not.

Now I must say: I am completely thrilled that I absolutely have no personal dumb ass friends at all. Each one has been to college, each one is as well read as I am, and each one has a remarkable vocabulary. Which is why when I DO beat them, which I often do, I feel as if I'm a Pulitzer Prize winner of sorts. On the other hand, I also have to say... it's often basically a game of chance, since everything depends upon the letters you are dealt in the first place. Thus, I really can't let my winning games go to my head.

One game I AM looking forward to playing came about in a crazy way. I was in the doctor's office recently, kinda talking to the office manager who is one of my favorite people there. She was chatting and I was putting away my smartphone at which time Devan noticed I was doing Words with Friends. OMG SHE SAID. TELL ME YOUR SCREEN NAME... WE SO HAVE TO PLAY! Bingo. Next thing you know we set up a play date and I'm totally going to have a great time with her.


Besides... I love my friends. I love playing with them. And, I can always enjoy making MORE friends. Of course, I have to totally stop being addicted to them at night, because seriously... this bit of playing until midnight only to have to then shower before bed is becoming a MAJOR drag. Not to mention... a happy waste of possibly productive time all evening long.

Oh yeah... if btw, you aren't impressed with my score down below then you should at least be impressed that I learned how to take a screen shot of my iPad! I was thrilled the night I found out how to do it. 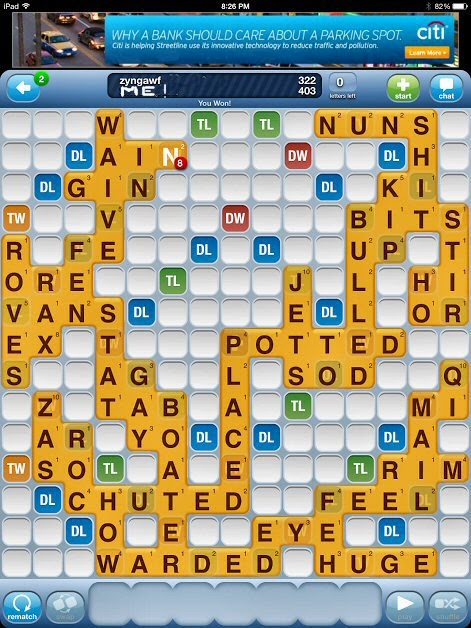 BTW... what's the deal with word in the upper right hand quarter?? I swear to God... I NEVER SAW IT BEFORE NOW. Holy crap. Oops. I mean shit.