ARE THESE THE CUTEST SHOES EVER? 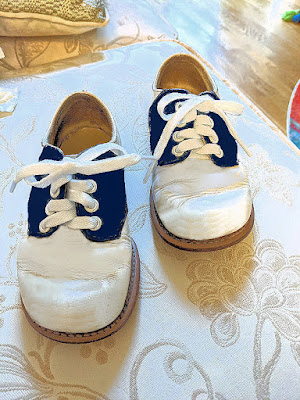 So I was going through my bedroom drawers the other day and boom. What do I find but these adorable shoes which made me smile  beyond belief. How many times you think I tied these? Uh… hundreds maybe? No wonder. My son must have been about three years old when he wore them pretty much every day to pre-school. I could eat him up every day during those years… so adorable. So innocent. So trusting. And, probably so often a pain in the ass.

But be that as it may… I could and did kiss him all day long. He was full of spirit and was catching on to what the world at large was all about pretty damn quickly. It actually took years for him to figure out that his father and I were the ones who were in charge of his life and I do have to say, we weren’t always successful.

Of course today, my kid wears a size 13 shoe so you can be sure he still rules the roost. Well… to a degree, anyway. On the other hand, he is way hipper than me and pretty damn brainy. He’s got his pulse on how and what the world is all about in today’s society but, then again, he totally doesn’t have my experience nor wisdom. So basically… it all works out in the end.

Granted, I’m still the rule maker whenever he comes back home for a visit although I will admit that when he does, I’m so thrilled to see him that I pretty much do whatever he wants given I love seeing him happy and smiling. I know. I’m a major sucker for this kid.

I also found a bunch of other things in my drawers. Things that should have been tossed years ago. Talk about separation anxiety. Case in point… I would never wear panty hose. Why would I ever want to  create yet another bulge at my waist line? I wouldn't call that a particularly attractive look. Hence the answer for me for the past 40 years has always been thigh highs. A perfectly excellent invention if you ask me.

On the other hand, why, at my age, would I ever need 40 pairs? I can’t even remember the last time I even wore a pair. Honestly… it was ridiculous. I went through them all and kept about a dozen… all in different shades and textures of black, white and nude but how much you want to bet I don’t even wear those in the next 10 years! Much like the never before worn bunch of leather gloves my Mother bought 60 years ago while on a European vacation which are basically fine for the hands of a 12 year old. Again… out they went.

In the meantime, I would NEVER let go of my son’s first shoes. As I said, I smile every time I see them. I did have his very first pair of sneakers bronzed. He must have been a year old, I bet. Maybe even younger. Nor would I ever throw out all the cassette tapes I recorded while he and I were playing when he was about 1 to 5 years old. Hearing his baby voice once again thrills me to no end. How this kid brings me joy, even to this very day.

On the other hand… ditching a lot of my OWN shoes is never a real problem. Me? I’ve got zillions so kissing good-bye to a dozen or so at a clip is never an issue. I’ll always have plenty from which to choose. And actually, the ones I do decide to keep, also give me a bit of a smile. As does clearing out several of my dresser drawers. Purging is always a good thing. And at my age… a total necessity. Who needs all this crap anyway? Oops. I mean… all these fine, extraordinary treasures.

I discovered that purging clears my mind and basically... no longer living within a mindset of conspicuous consumption is totally freeing to one's soul. I do not horde but man, it was so time to find a new home for so many items. Naturally, my next hurdle will be to once again go through my 3 closets and my kitchen. Don't ask.

The bottom line to all this? I suspect I'm just a major sentimentalist. I love enjoying memories of things that touch my heart. And honestly... what could touch your heart more than your own child. Or even pictures of everyone who is or has been someone you love deeply. Talk about making your life richer. Speaking of which...

About a month ago, I decided I wanted to become filthy rich. Thus I decided to buy scratch off cards that have the potential of bringing in loads of money. Now THAT would make my life richer by leaps and bounds. If only. Therefore, if I never again post another blog entry ever... you'll totally know why.