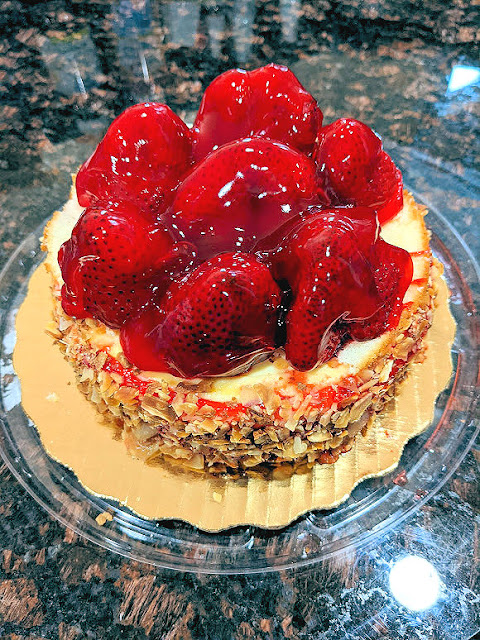 I try to be careful in terms of what I eat. Well… at least for the month leading up to my testing for sugar levels, that is. THAT month, I am VERY careful about my food intake given I am not into any doctors yelling at me for not maintaining good health. The two months prior to testing however, I pretty much eat whatever the hell I want, throwing all caution to the wind. I totally have this scam down to a science, btw. Two months, eat crap. One month eat salads and protein. Boom. Sugar testing numbers come out perfect. With that, I do have to say, I eat a lot of fruit and… some dairy.

Which is why the picture up above is PERFECT for my scam diet. Fruit, check. Dairy, check. YAY STRAWBERRY CHEESECAKE! I cannot even reMEMber the last I ate this sensually delicious treat. But believe me, I’ve recently made up for it, but plenty. It began a week ago, when I went to the grocery store because HALLELUJAH! my son was coming to spend several days with me. I totally wanted to stock up on all his favorites. Isn’t that what EVERY Mother is supposed to do? Bingo. I did.

While in the grocery store, given it was just before Valentine’s Day, there was this whole big display of all kinds of goodies for the holiday. Naturally all the baked goods were either red and white, or pink and white. However… there was only ONE item, and one item only, that caught my eye. THAT CHEESECAKE YOU SEE ABOVE. OMG... the strawberries were the size of tennis balls and the cheesecake was screaming my name, yelling: BUY ME. BUY ME. It needn’t have screamed however… I was on board to buy it in seconds flat.

And man… am I glad I did. It’s a total favorite of mine… and my son’s. So there was never a discussion in my mind whatsoever what I was serving for dessert that evening. Of course, he’s lucky he arrived when he did for you have NO idea what sort of restraint I had to use, to not dive right smack into the cheesecake just after mere hours of my bringing it home. Can you blame me? Just LOOK at it. Talk about something calling my name over and over again.

Okay. So basically… dinner was over and YIPPEE. I cut a small slice for him and then for myself. TO DIE FOR is all I can say about it’s taste. Hence… it was so worth the wait! The Gods of All Cheesecakes smiled down upon the both of us that night. And the days after, too.

For it goes without saying that everyday after that I slowly, deliberately, meticulously, began to eat away at this cake… one bite at time. I COULDN’T HELP IT! I was an addict in no time flat. And then, the next thing you know: two days later, my son opened the refrigerator and said: WHOA. YOU’VE  BEEN DOING SOME JOB ON THIS, ALRIGHT! Damn right I did. I told you... I WAS ADDICTED. And SOMEthing, I don’t know what, was taking over my body and made me have a bite for breakfast, a bite after dinner, a bite before bedtime, and a bite any damn time I felt like it. 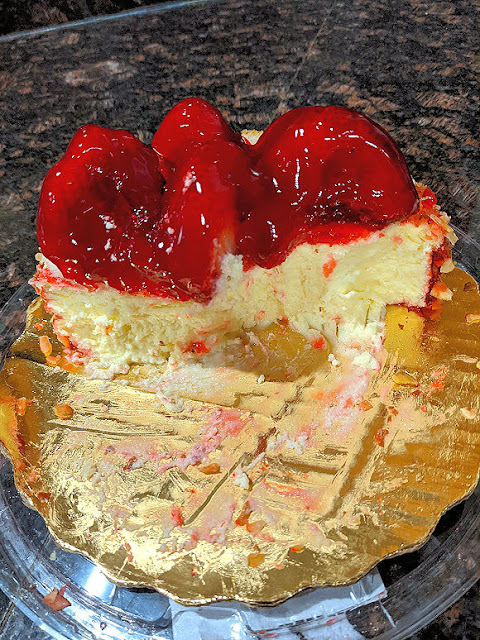 And then, you know what? THE GODS OF ALL CHEESECAKES PUNISHED ME. AND PUNISHED ME BADLY.

For… on the morning my son was leaving… I was about to take one tiny bite just for good measure, and GUESS WHAT??

I was literally frozen with fright, if you must know the truth. And my kid must have recognized it IMMEDIATLY for in seconds flat, he bent down, started scraping all the cake back onto the plate, even asking me if he should throw out the huge strawberries that fell five inches away from the everything. HELL NO, DON’T THROW THEM OUT. This cake is going no where but right smack back onto that plate, as if nothing EVER happened at all. Including the rolling strawberries!

Don’t even fucking ask. It was a disaster! Yet not so much a disaster that I didn’t resurrect this prize of a cheesecake and made certain I had the chance to be sure every last bite of it could STILL get into my belly with no trouble at all. I was NOT going to let that cake die under any circumstances whatsoever. And… I didn’t. 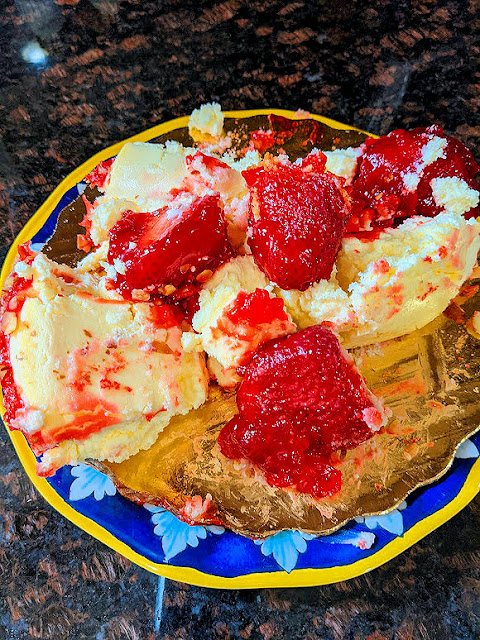 I am happy to report that ever damn bite of the cheesecake, having been on the floor or not, eventually was eaten by piggy little me. CAN YOU BELIEVE IT?? A grown woman eating cake from the floor?? AM I OUT OF MY MIND? Well… clearly, the answer is yes. After all, there are people STARVING in this world and I refused to waste one damn bit of it. Granted… it took another 3 days to polish off this fruit and dairy mix, BUT I DID IT! In record time, too. I so deserve gold medal.

In the end btw... I can not TELL you how happy I was when this cheesecake was finally GONE! KAPUT! EATEN! FINISHED! Whew. My addiction was finally over, thank God. I could even once again, look in the mirror, feeling no more remorse whatsoever, over what a degenerate I obviously am. Meaning: my happiest day was when I bought the cake and then again, when I threw out the cake. I’m telling you… seriously… I was SICK OF LOOKING AT IT, ALREADY. Well… until the very last bite that I had left of it, anyway.

So… a couple of lessons here: 1.) fruit and dairy are indeed excellent sources of nutrition 2.) disasters do in fact happen 3.) things also eventually get better 4.) old ladies with an otherwise high amount of dignity can in fact easily, in no time at all, become a low life… and a major disgusting gluttonous degenerate. Yay me!