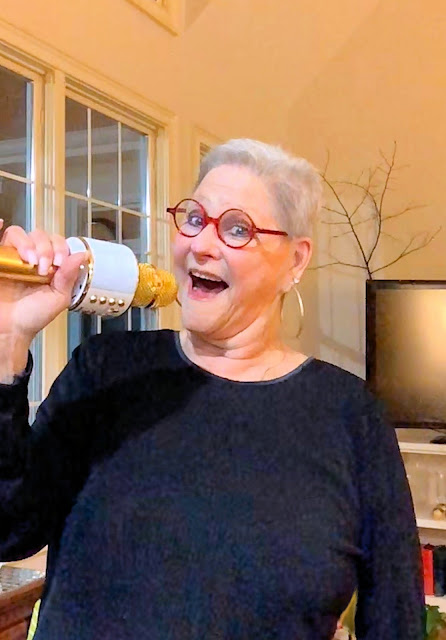 I’ve often said that in my next life I pray I will have a waistline. I also pray I’ll have a flat belly. And oh yeah… a hot looking ass, too. A natural red head wouldn’t go amiss, either. Lastly, I would LOVE to have a great singing voice. I guess when I was young, I could  MAYbe sing on key, but not really.

In fact, when my parents took me to college as a freshman, I remember my Dad seeing a sign in the University Center, it's student union building, inviting students to join the Glee Club on campus and then telling me... to sign up imMEDiately! Can you even imagine? I am so telling you. One audition and the club would throw me out on my fat ass in seconds flat. With MY voice? Please. So never going to happen.

Granted, before I became old, I could sing the words to every song ever recorded from 1949 on. Teresa Brewer, Patti Paige, Ray Charles, Frankie Laine, Sarah Vaughan, Frankie Valli, The Four Tops, Janis Joplin...etc. etc. Of course, even then, Fats Domino was my favorite. Well… until Elvis came along in the early 50s, that is. One look at him and bingo. He easily moved into #1 on my A List. But to imagine I actually HAD a voice was another thing altogether. So much for my singing career.

But guess what. Thanks to my niece, Laura, I now CAN be a singer, after all! Talk about a dream come true! I can’t even believe it. HOW did I become a rock star? Oh man… a sheer miracle is how. And you too, can become one also if you so desire. Right smack in your own living room if you want! Hallelujah. Is this the best idea or WHAT?? So the deal is…

There I was one day recently, having a perfectly wonderful day. And, it got even more wonderful because I got a text from Laura telling me that Amazon delivered a package for me. Now THAT’S music to my ears, alright. A PRESENT! One I didn’t even have to pay for myself! Xmas in April, if ever there was! So how long you think it took me to race to my front door? Uh… seconds.

So I grab the box, I sit down in my family room, I open it and I was stunned. THE most beautiful microphone you ever saw! A very high tech one too, btw, which only meant I had no clue at first what the hell it was all about. BUT… I still had to put it on my mantle regardless, given it was SO up my alley. Honestly... the microphone couldn't look any more beautiful than say a Fabergé egg. Well... except for the fact one is worth less than $40 maybe, and the other is worth about 40 MILLION... but who's counting. I briefly read the directions and decided this was way above my head thus needed to wait until I had time to really concentrate on what it was all about. The microphone sat there for about 5 days, maybe.

THEN… the time had come. Finally one evening, I figured it was time to check out this stunning microphone and see what was going on with it. OMG. YOU HAVE NO IDEA. I became a famous rock star within MINutes!

Turns out this microphone is also a portable home karaoke machine. I mean really… what could be more fun?? A major recording studio right at my fingertips! Seriously. You have several buttons that will do all kinds of things. To set it up however, you have to sync it to your cellphone or iPad Bluetooth. Then... you go to either a playlist of yours or to YouTube and bingo. You choose a song and START SINGING. LYRICS AND ALL! I could be Tina Turner or a back up to Elton John in no time at all! Shit… I fell in love with this immediately!!

I then Facetimed Laura and began singing with Tina right off the bat so she could see how her Aunt Linda was the instant musical star of the stage. Naturally, I was a hit. I then had to sing for my son, so I Facetimed him, too. He LOVED having a rock star for a Mother and laughed with sheer pride during my entire rendition. Then of course, I repeated my performance for anyone I could possibly think of. Why hold back? I had major fans within minutes.

Which only means: forget about home being where the heart is. Better home should become your new karaoke studio! You’ll be a hit with everyone who enters your home, forever. Let alone any home you ever go to visit. Remember: this studio is portable! Stuff the mic in your purse, go somewhere, turn your phone on and boom. You’re now the entertainer of the year. And your friends can be one, too. Well… IF you let them try it out that is... but I’m not really sure I want to share my stardom quite yet.

In fact, Laura was telling me she was singing all over the place when she recently hosted a brunch at her house. Apparently she was entertaining everyone up the kazoo until one guest asked if they could try it out. SURE… HERE… TAKE IT AND SING A SONG! Uh… big mistake. Turns out the guest had a voice like you wouldn’t believe! Which is why I’m totally thinking twice before handing over my mic to anyone else. I know. But I hate competition so why even invite it. Meanwhile… the bottom line to all this??

GO BUY ONE OF THESE TOYS FOR ANYONE YOU LOVE. Oops. I mean one of these state of the art karaoke and/or recording enterprises. You will totally have the time of your life pretending you have record contracts with every music producer known to man. You want to be Aretha Franklin? No problem. You love Rod Stewart? Boom. You’re his back up singer. Country music? The blues? Doo Wop? IT DOESN’T MATTER. YOU’RE ALL OF THESE IN THE BLINK OF AN EYE! It’s totally amazing.

So… thank you Laura for giving me the chance to rock out any time my little heart desires. “You’re simply the best… better than all the rest”! I so wish Grandma could see me singing Engelbert Humperdinck’s RELEASE ME. She’d love it… it was totally her favorite!

Now… if only someone could give me that ass and waistline! But apparently I have to wait until my next life for that. Damnit.